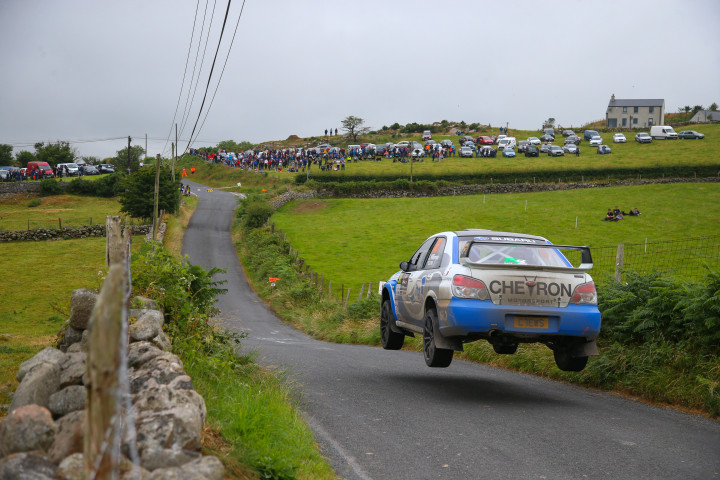 FastR Head to Northern Ireland for Down Rally with Rich Clews

This weekend saw the first event as a FastR Athlete for ITG Head Honcho and experienced rally driver Rich Clews. Together with co-driver Carl Williamson, who began his career with Jari-Matti Latvala and has competed in the World Rally Championship, they would battle the fearsome roads around Lisburn, Northern Ireland.

The journey over was spent studying DVDs, images, and maps of the 142-mile (52 stage miles) layout, with the day preceding the event spent driving the course multiple times in Rich’s “Course Car”, at low speed, in order to get a full idea of the intricacies and characteristics of the track, an incredibly important part of any rallying event. It’s the co-driver’s job to make suitable notes that the driver can understand, which can then be read out whilst the car is flat out on the stage in the following days.

With the UK & Ireland having been in the grip of unprecedented temperatures the week before the event, all bets were on it being another sunny day. Alas, it was not to be, and after a last-minute set of wets were secured by the team at Pirelli, the pair were ready to go.

With the roads over in Northern Ireland demanding a very specific type of setup, Rich has spent the day earlier in the week testing the Impreza at Trawsfyndd, deep in the Welsh Mountains. Thanks to a suspension redesign by the teams at Chevron and EXE-TC, and some significant ‘body changes’ by skilled fabricator Will Malkin, both Rich and Carl entered the event confident that the car would perform well.
By the first service stop, the pair were lying in 13th overall – no mean feat with more than twenty-five significantly more expensive R5 cars competing against them.

We’ll leave the rest of the words to Rich himself:
“The second loop of stages was a little more difficult, as the rain had mostly stopped, so on the way back to service we were thinking we could move off the wets to get some better times, but then the heavens opened so the choice seemed obvious. It wasn’t! With a time of 11th fastest on the previous stage in full wet conditions, and a chance to move up to just outside the Top 10, we knew with a drying road it wasn’t going to be possible. From this point on it was just a case of managing the tyres and driving flat out to see where we could come overall.

“Getting to the end of the rally in 16th overall and 2nd in class, alongside being the 5th Protyre British Tarmac championship crew, was a fantastic result with the caliber of driver and machinery there on the day. To be honest, when you’ve driven the car that fast all day and put it on the trailer just needing a wash that’s a result in itself!

“We had the ‘noisy exhaust’ fitted to add to dramatic effect too, and I think this made us popular with the spectators! I genuinely can’t believe how much interest the Impreza gets amongst a field of R5 cars. It’s great to see and obviously brilliant for the sponsors, with all those social media likes and shares.

“We can’t wait for the next one!”
← Back to all articles